↑ Scroll back to the top

Numbers We Can See

Video games run on computers. Computers are a lot like calculators: They are machines that take numbers, do something with them, and give other numbers back.

After computers came to exist in the 1950s, people began to realize all kinds of ways numbers could be used to do different things. For example, numbers can be used to represent letters. They can also be used to control other devices, like telling a screen to generate images. Fast forward to now, and these ideas have become so commonplace that we barely even think about them.

Video games have always been built on computer technology. The earliest things we can call “video games” date back to software written on some of the first computers in the 1950s. The birth of video games as an industry was propelled by the availability of affordable microprocessors, beginning in the 1970s.

How Much Is Visible?

Numbers may be the atoms of video games, but when you look at another person, you don’t see each atom making up their body. Instead, you see a person; a meaningful whole. Even though in our brains we logically understand that everybody is made up of atoms, in our hearts we see each person as a complete and self-contained being.

There is a similar intuitive leap with games. We do not see them as a collection of rapidly changing numbers, but instead see what the numbers represent.

When a developer is writing the code for their game, they are making all kinds of numerical decisions like “How fast should the player walk? How high should they jump?” But players think more abstractly, like “Can I outrun this enemy? Can I make the jump?” Players only tend to think about numbers when they are displayed somewhere on the screen.

This means that there is a lot of power in controlling which numbers a player sees! A developer’s decisions about displaying numbers has a profound impact on the player’s experience. 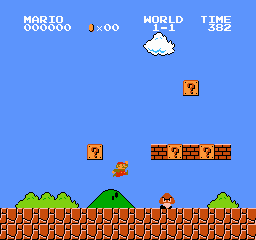 The player can see four numbers on the game screen: “Score,” “Coins,” “World,” and “Time.” At the same time, there are many other numbers you can’t see, such as Mario’s X and Y positions, his velocity, the camera scroll offset, and so on.

When we consider all the games out there, it’s always the case that some numbers are visible to the player and some are not. But things are rarely as cut and dry like in the Mario example.

Developers don’t just decide which numbers to show players, they also control how numbers are shown. Numbers will inevitably be present in games, but effective visualization lets players understand them without having to think too much about it. This is the principle of visualization, and it lets players understand numbers with their intuition instead of their intellect.

Visualization is important because players tend to feel more than they think. It is only human nature, after all. Ideally, a player can look at a screen and instantly understand all the information they need, then use that to inform their decisions. In many games, players are making several decisions every second!

In the first Final Fantasy (1987), only the player characters’ HP was initially visible on screen: 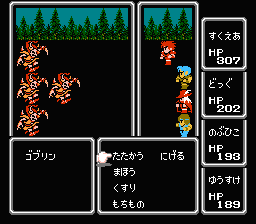 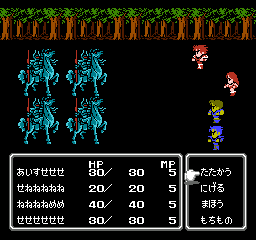 By the fifth entry, Final Fantasy V (1992), the series had moved to an Active Time Battle system. This brought the Time gauge, unfortunately at the loss of other stats: 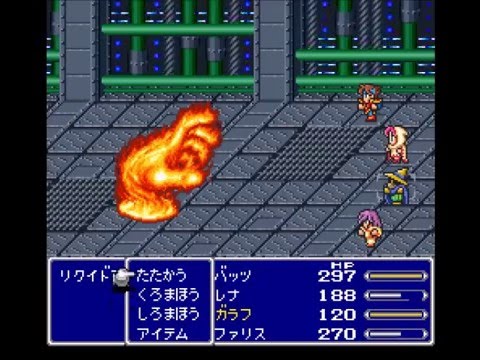 Then by Final Fantasy 7 (1997), all of the core battle stats resurfaced as both numbers and gauges: 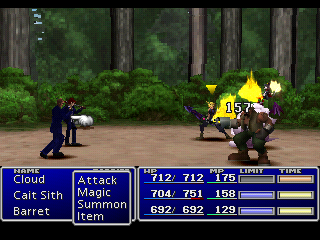 It is clear that over the course of 10 years, the developers had shifting ideas about how to help the player understand the state of the battle. They also were dealing with the ground shifting beneath their feet as they moved through console generations. Regardless, through experimentation and by balancing needs, they discovered more refined solutions.

Visualization is the lens through which players see and feel the rules of the game, so developers ought to ask, what is the best way to help players do that? Finding the answer is of course a unique challenge for every game.

These examples show that visualization is an ongoing challenge. The ideal solution may be elusive, or could even demand years of exploration. It is a developer’s responsibility to consider visualization thoughtfully.

Visualization is just one facet of numbers. For every number we see on the screen, there are a lot more pulling the strings behind the scenes. Sometimes we even get an opportunity to peek behind the curtain, whether that is driven by developers or their player communities.

One such example is Individual Values (IVs) in the Pokémon series. Pokémon celebrated its 25th anniversary this year, and has iterated on its core series gameplay across nearly 20 entries. But IVs have been part of the formula since Pocket Monsters: Red and Green (1996).

Put simply, IVs are a Pokémon’s base stats for battle traits like Attack, Defense, Speed, and so on. In the earliest games, a Pokémon’s stats at a given level could be determined by a math formula that combined their level with the corresponding IV. But, even though IVs were so critical to calculating stats, they were completely invisible to the player!

As the series grew in popularity, the competitive player community did as well. Over time, players got together and figured out how the hidden numbers worked. They also began to wonder why such important numbers were even hidden in the first place!

Game Freak’s Shigeru Ohmori, director of Pokémon Omega Ruby and Alpha Sapphire (2014), explains the philosophy behind this in a 2014 interview with Wired.

Each Pokémon does have [Invidividual Values], but I don’t consider those data as parameters. I prefer to think of them as real, living creatures. It’s the same way that if you have a pet and someone else has the same breed of dog, it’s a different dog. That way people can play the game and my Pokemon will be different to your Pokemon even if they’re the same type.

As the series progressed, the concept of IVs were expanded upon, and gradually became more visible and available to advanced players. The stat formulas also grew more complex, becoming more influenced by the time a player spends with their Pokémon.

Nonetheless, the endurance of the IV system throughout the series is a testament to the original intent of making Pokémon feel organic, and the effectiveness of hiding these numbers from the player to suspend their disbelief.

It’s All About The Numbers

Video games are numbers at work! As players, we see some of them directly, while others are hidden from us. Game development entails making all kinds of decisions about which numbers to convey abstractly, and which to convey concretely. A well-honed game experience is one that finds the right balance.

Don’t you wonder, how might you use numbers to express your ideas?